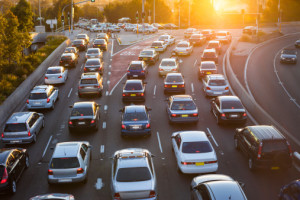 In an effort to gain an even greater understanding as to what their clients are really looking for in a home, the National Association of REALTORS® gathered May 16 to discuss one factor that becoming increasingly important to home buyers: traffic and commuting.

The panel of REALTOR® representatives and experienced economists found that with the increase of traffic in most metropolitan areas due to job growth, commute times are becoming a major factor to home buyers and may ultimately influence the way that communities develop in the future.

As the economy continues to stabilize, many metropolitan areas are booming with local businesses finding all of their necessary resources within the confines of their local areas. These businesses are looking to optimize operations by hiring more skilled workers and interacting with other companies in the area for business practices. As a result, cities are growing and traffic in an out of large cities is heavier than ever.

“Skilled workers move where they can find work, creating more traffic and driving up housing prices,” said Lawrence Yun, NAR chief economist. “It creates a positive feedback loop; the more skilled workers employed in an area, the more others want to move there.”

While much may not be able to be done about commute times as the economy grows, many home buyers may be looking to eliminate certain costs associated with their commute by slashing travel times and using mass transit resources.

According to NAR economist Jessica Lautz, “Seventy-three percent of recent home buyers said that commuting costs were an important factor when deciding whether or not to purchase a home.”

With such a focus on traffic and commute times and the increased importance of home owners wanting to limit their time on the road, a shift may be in store in the future of real estate development. Highways and roads are an expensive alleviation to this problem, and NAR economists see communities shifting to walkable designs that may take vehicles out of the question altogether. This could put home, work and amenities such as shopping, transit and entertainment all within a leg’s reach, so to speak.

“There is no way to solve traffic congestion,” said Anthony Downs, economist from The Brookings Institution. “There is no city in the world rich enough to build an adequate amount of roads to accommodate all of the workers and students who want to be on the road at the same time. Congestion is simply an inexorable part of the way cities grow.”

These communities seem to be attractive to younger, single buyers who seem to take greater advantage of these urban amenities. Of those respondents who factored commute into the home buying process, the average age was calculated to be 38. At this age, marriage and parenthood tend to be important factors that draw home owners out of large cities and into more affordable suburban or even rural areas.