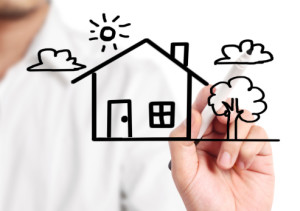 The housing market has yet to take off this year as many economists hoped it would. In a recent survey conducted by lending powerhouse Fannie Mae, a big road block for many Americans is weak morale in the direction that the economy is headed and the affect that will have on household income.

Fannie Mae conducts a monthly national consumer attitudinal survey as a means to determine where American consumers are at in terms of mental and emotional relation to current market conditions. Response provide an indicator as to the owning and renting behaviors of consumers and can help to gauge where Americans are at with their finances and where they may go with investments.

According to the latest installment of the survey, Americans fear for the one factor that will enable them to purchase a home and afford the monthly expenses: income. Approximately 57 percent of respondents indicated that they believe the economy is headed in the wrong direction, resulting in a bleak outlook on the ability to afford a home. Respondents whose income was significantly higher than it was at the same time last year was also found to have decreased four percentage points from last year to 21 percent.

Americans Holding Back on Housing Market

Respondents to the study were generally found to have a positive attitude toward housing, however their general negative attitude toward the economy has stalled many from entering the home buying or selling market, a factor which has restrained activity severely below seasonal trends.

“Consumers’ lukewarm income expectations and reticence about the economy seem to be holding back housing demand,” said Doug Duncan, senior vice president and chief economist at Fannie Mae. “This year’s spring and summer home buying season has gotten off to a slow start, even as mortgage rates have trended lower over the past two months. Our National Housing Survey data show that economic conditions continue to be the top concern among consumers who think it’s a bad time to buy or sell a home. While recent housing activity suggests that the worst of the slump may be behind us, this caution among consumers supports our expectation that the rebound in home sales will likely be too modest to pull sales for all of 2014 ahead of last year.”

The survey, which polled 1,000 Americans via live telephone interviews, also found that Americans are feeling slightly less confident about buying a home but more confident in selling a home. The share of respondents that felt it is a good time to buy a house slightly month-over-month to 68 percent while those who felt it is a good time to sell a home rose to 43 percent, which is an all-time high for the survey.