Some Services of Fannie Mae and Freddie Mac to Merge 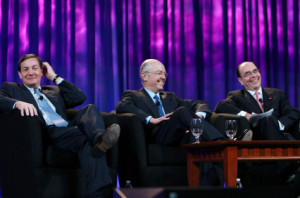 According to the Federal Housing Finance Agency’s acting director, Edward J. DeMarco, some services of Fannie Mae and Freddie Mac will merge. The hope is that the two companies, which have each had their share of financial issues, will be able to cut some of the fat and emerge as fiscally sound once again. It’s unclear when the deal might be finalized, as some politicians fear that it’s too soon to start making changes during a time when the housing market is continuing to recover.

The “new business entity” would transform home loans owned or guaranteed by Fannie Mae or Freddie Mac into mortgage-backed securities. DeMarco said, “We are designing this to be flexible so that the long-term ownership structure can be adjusted to meet the goals and direction that policymakers may set forth for housing finance reform.”

It is anticipated that Congress will move to finalize the deal to replace the country’s biggest mortgage backers. The new entity would create a single, more cost-effective vehicle and would eliminate the competition among the two. Both Fannie Mae and Freddie Mac have faced bankruptcy in the past, and were seized by the government in 2008 after the subprime housing market fell apart. Both the Obama administration and Congress have been lobbying to shut them down and diminish the government’s role in the mortgage market.

The two mortgage backers have received about $187 billion in bailout money since December, and are now 80% owned by taxpayers. Despite having repaid about $55 billion to date, DeMarco said that merging the two companies is the right move. Duplicate roles at both Fannie Mae and Freddie Mac, like providing securities disclosures and paying investors, would also be eliminated by the merger.

While the entity has yet to be named, DeMarco says it will function with its own CEO and board chairman. Additionally, the company would solicit funds from Fannie Mae and Freddie Mac.